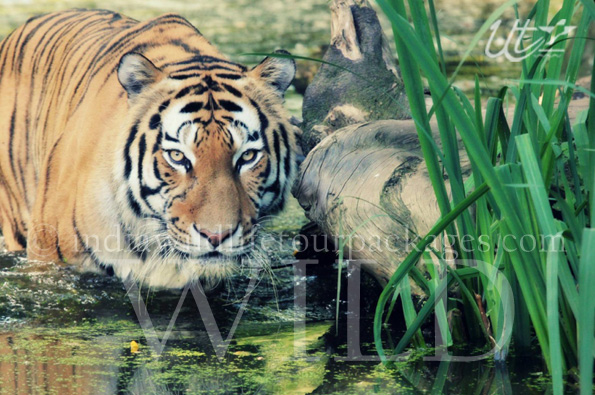 Jim Corbett the oldest park in India, extends along the banks of the Ramganga river, encompassing the dense Sal Forests of the Himalayan foothills & the Savannah vegetation of tall grassy meadows. Jim Corbett National Park India had the proud distinction of being chosen as the venue for the inauguration of Project Tiger in India; earlier part of Uttar Pradesh now comes under Uttaranchal, the newly found state.

Contact us for Booking / Enquiry of Package Tours to Jim Corbett National Park.

The main feature of this ridged valley is the Ramganga River, running broadly west by south west, the catchment streams of which vivisect the land into numerous little ridges and ravines. The topography is therefore very varied-the streams forming islands of ‘sheesham’ trees, the ridges being thickly foliated with ‘sal’ trees and the pastures carrying long grasses. In this variety of habitat abounds wildlife of enchanting beauty including 50 mammals, 577 birds and at least 25 reptiles. The river teems with mahseer, gharial, mugger and flocks of cormorants.

Project Tiger was inaugurated here on April 1, 1973. The center of tourist activity in the park always continues to be Dhikala, at the heart of the core area. Here, substantial residential accommodation has been built along one end of a large grassy plateau perched on the edge of the cliff bordering the Ramganga reservoir.

In the vicinity of the Corbett National Park are the wildlife sanctuaries like Rajaji National Park and Dudhwa National Park. Lucknow is the capital of Uttar Pradesh and one of the major tourist destinations in the country.

Corbett National Park is rich in vegetation, with different kinds of trees and shrubs. The lower reaches of the Park, where the land is flat compared to the upper reaches, consists of tall and slender sal (Shorea robusta) trees. Shisham (Dalbergia sissoo) and khair (Acacia katechu) trees are found in the middle reaches, while the upper reaches of the mountains are full of bakli (Anogeissus latifolia), chir (Pinus roxburghii), gurail (Bauhinia racemosa) and bamboo trees. In the Park are 110 species of trees, 51 species of shrubs, and over 33 species of bamboo and grass that are mostly found in chowds, or meadows.

Corbett National Park has more than 50 species of mammals, 585 species of birds and 25 species of reptiles, but the Park is known for its elephants and leopards, not its tigers. Many kinds of deer, namely chital (spotted deer), sambar (Indian stag), chinkara (Indian gazelle), pada (hog deer) and muntjac (barking deer) abound in the Park. Elephant herds comprising tuskers, females and calves are commonly seen. However, an elephant herd with calves is perhaps the most dangerous encounter in the wild, for elephants are very possessive of their young and do not hesitate to charge at intruding human beings.

Leopard sighting is even rarer than that of the tiger, and these spotted cats confine themselves to the higher reaches of the Park. Other feline species found in the Park are leopard cats, jungle cats, the rare fishing cat, and caracal, to name a few. Sloth bears, wild boars, monkeys, dholes (wild dogs), jackals and ghorals (mountain goats) also inhabit the Park.

Elephant Safari can be arranged in Dhikala and Bijrani. Jeep Safari are available from outside the Park as well as from Dhikala

Location of Jim Corbett National Park: Corbett, Uttaranchal, India
Area covered : 1200 sq. km
Main Wildlife Found In Jim Corbett National Park : Tiger, Leopard, Crocodile
Best Time To Visit : As with the rest of the country, there are three well-defined seasons at the Corbett National Park-winter from November to February, summer from March to June and the rainy season the rest of the year. Corbett is closed for public from June 15 to November 15.
How to Reach : Phoolbagh, Pantnagar at a distance of 50 km is the nearest airport. Delhi at a distance of 300 km is the nearest international airport. BY ROAD - Dhikala is 300 km from Delhi, 145 km from Lucknow and 51 km from Ramnagar. The route from Delhi spans Hapur-Murababad-Ramnagar. The turn off is some 7 km beyond Muradabad to the left, marked by a small board. The route from Lucknow spans Bareilly-Kichha-Rudrapur-Doraha-Kashipur.